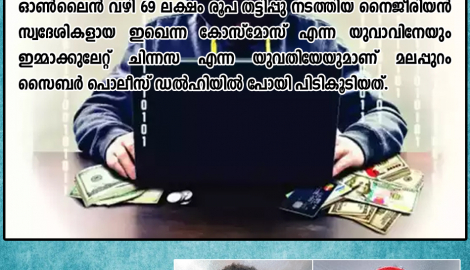 The Malappuram cyber police arrested a young woman named Immaculate Chinnasa and a young man named Ikhenna Cosmos, natives of Nigeria. The accused have stolen more than Rs.69 lakhs by hacking into the Manjeri Cooperative Urban Core Banking server, installing the mobile banking application on their mobile phones and sending funds to other accounts using the IMPS fund transfer facility.Based on the complaint given by the bank manager to Malappuram district police chief, Malappuram cyber crime police station registered a case and started investigation. After that, the Nigerian nationals were arrested due to the investigation after staying in Delhi for several days